While I am away fishing I thought I'd bring back a few of my previous posts that you may have missed. The date below is their original publication date.

A Shoe in My Mouth

You know what I haven't done on this blog in a while?

When I first started this blog I thought I would talk exclusively about the writing life, the craft of fiction, and the pursuit of publication, but I soon got bored with that. And to tell the truth not many people read this blog when I tried to make every post a how-to article. It wasn't until I began sharing anecdotes of my crazy life that I built up much of a readership. I will always consider myself a storyteller first and a writer second.

I've told you about my days working for Earl at the Feedstore, my flight on Sasquatch Airlines, my first set of swats at school, and of course my days as a second rate mall Santa Claus. There are others but not lately so I thought today I'd don my storytelling hat and share a humorous tale about one of just many times my wife has contemplated murder. Hey, it ain't easy being hitched to me.

"What was that?"
I wanted to ignore the question and drift back to sleep but my wife's elbow jabbing my rib cage made that impossible.
"Wake up. Do you hear that?"
Wind driven rain lashed at the window and thunder rumbled the panes of glass."
"Yeah, it's raining." I rolled over out of elbow reach.
"The tornado sirens are going off!" Panic filled her voice, but being that she was about five months pregnant I didn't put too much store in that. Only a few night before she'd woken me up in a panic because she smelled ketchup. I had to get up and turn on the lights to show her no evil band of home invaders had stormed our house and began painting the walls with ketchup at three in the morning.

I listened half heartily for a few seconds and then said, "That's not the sirens. it's just a dog howling somewhere."

She flung the covers off and with a sigh headed for the living room. To tell the truth I was just glad that her pointy little elbows were now out of reach.

I heard the TV come on and the first words out of the weatherman's lips, "Their is a possible tornado over the Lake Tanglewood area."

Our property is about a hundred yards from Lake Tanglewood so I knew my night of peaceful slumber was over.

My wife had never been a worrier until our first son was born, but she has made up for that ever since. He was twenty months at the time and she immediately ran to his room at the opposite end of the house. All the while shrieking that there was a tornado and that I needed to get up.

We do not have a cellar but our neighbors across the road do so I swing my feet to the floor and began searching for a pair of pants since I didn't figure they wanted to see me in my boxers. At this point my wife flew into our room with my son in her arms. She barked a few more orders my direction and then grabbed the phone to dial the people across the dirt road to let them know we were headed their way. 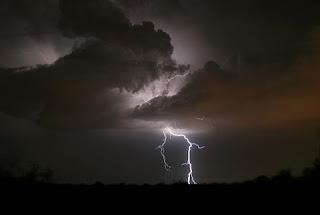 As I was dressing the hail began to fall from the sky. The sound of the ice chicks striking the roof drowned out even the thunder, but not my wife when she noticed me lacing up my shoes.

"WE DON"T HAVE TIME TO PUT ON SHOES!" And she ran from our bedroom.

I found her a few seconds later in the living room. She was trying to tie one of the throw pillows from the couch onto our son's head.

"What are you doing?"
Wide-eyed she looked at me, "It's hailing. I don't want him to get hurt."
"Give him to me," I said. Stuffing him inside the flap of the raincoat I'd just put on I turned to my wife. "Follow me. We're gonna have to run hard."

The rain and wind swirled when I opened the door and I leaned forward in an awkward stance to run so that the trunk of my body would shield my son from the rain and hail. By this point the hail as only pea sized.

I slogged through my front door and the ankle deep river of mud that was the road between out house and the safety of the a cellar. My neighbor's wife was on their front porch when I made the fifty yard dash. I handed her my son and turned back to help my wife, but she was no where to be seen. I started across the yard calling her name and then I spotted her on her back in the mud and muck of the dirt road.

As lighting crashed all around I helped her to her feet and we scramble for their house. They brought her a towel and a change of clothes as she explained that her feet had slipped because of her flip-flops.

I shouldn't have, but I did say, "You should have taken time to put on real shoes like I did."

Yep, I was met with an icy glare.

We stayed at the neighbor's for several hours as the storm passed. A tornado never did touch down and as dawn broke the rain had let up to the point that I was more than ready to head home. So our little family started back for home in a slight sprinkle.

My wife took one step onto the muddy road and .. You guessed it fell again.

And of course I said, "Bet you wish you'd have put on real shoes now." She wouldn't even take the hand I offered to help her get up."
Posted by Travis Erwin at 11:51 PM

Email ThisBlogThis!Share to TwitterShare to FacebookShare to Pinterest
Labels: I'm a Doofus, Texas, The Family

Travis, my friend, I know you're hot stuff, but this is ridiculous.

Travis, don't you know that you should never tick off a pregnant woman. You are indeed lucky to be alive...

That's a great story! It's amazing how much someone can read in someone's glare :)

You're a gifted story teller. I enjoyed it, thank you.

Travis, your wife is beautiful and wise, but, um, where is she from that she'd panic over some wind?

You are great, that's what. I've just opened a new website and now I have an idea for a post. Thanks, Travis.

You're lucky your wife didn't push you over. ;) I hadn't read this post the first time round, so....thanks!

i have heard that story I know at least twice but i was laughing so hard i had tears in my eyes.. Good stuff!!! Missed ya while you were gone!!!