The Bobber Doesn't Fall Far From The Pole

Until I posted the picture that now serves as the header of this blog, most of y'all had never seen me without a fish in my hand. 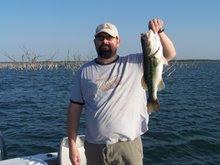 Then there was this shot of me holding this 6 pound striper. 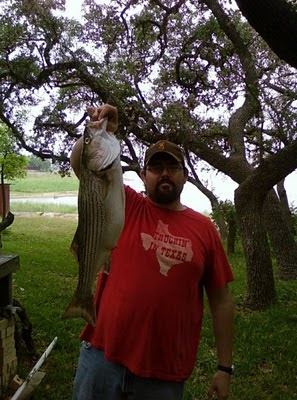 And last but not least there was the 20 inch rainbow trout which I pulled out of a tiny New Mexico stream. 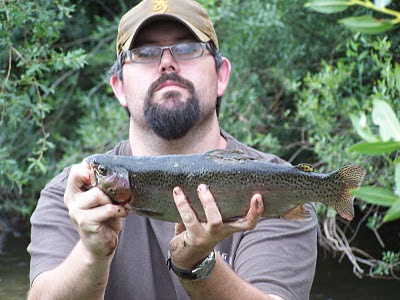 The best thing about that last shot is that I was about 3o pounds lighter than the other shots thanks to my weight loss bet. Yeah I've since gained most of it back, but at least I've eaten well.

Now I was proud of all those fish and I certainly enjoyed catching them but once you have kids pride begins to take another form. So while the fish in these next two shots are not as big I am even more proud to share them.


My 9 year old, holding a nice largemouth he fooled with a white jig. 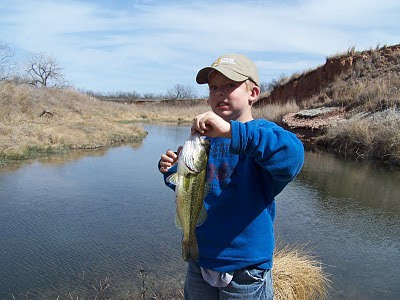 You can tell by his expression that he's still got issues with sticking his fingers inside a fish's mouth.

And here is my 7 year old hoisting a sunfish he caught. 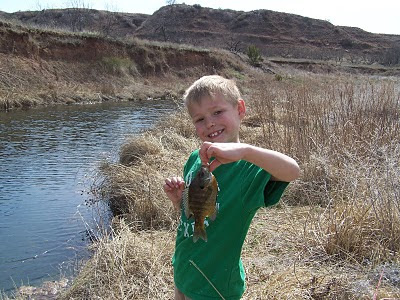 Not he is quite pleased with himself and had absolutely no reservations about handling the fish.

Both of these fish were caught near on a friend's land near Shamrock, Texas. About 90 miles east of Amarillo. 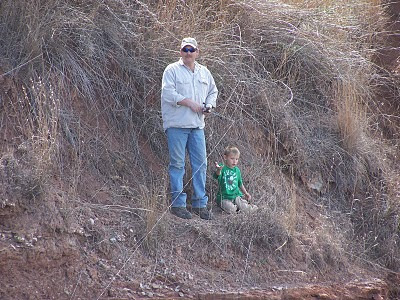 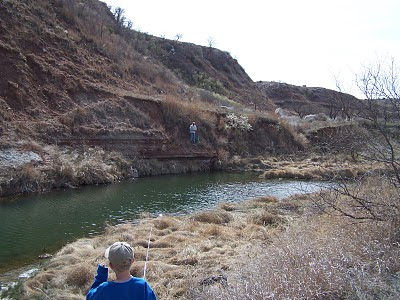 Now my youngest son loves nothing more than tormenting his older brother so immediately upon releasing his catch back into the water he stuck his finger up to his brothers nose and said, "Sniff my finger, it has fish smell on it."
Posted by Travis Erwin at 10:09 AM

(Grin). I'm not much of a fisherman--I'm more like your oldest son, with a few issues about handling worms and fish. But I've got some great pictures of my youngest holding up fish he's caught. Y'all grow 'em big in Texas though. Must be the year-round growing season. We freeze our fish to death for a few months every year.

Tremble with fear, o ye fish of Texas, before the mighty Erwins, man and boys!

Nice to have a childhood that includes such a great past time.

Bwahahaha! Thank goodness your kid is 7 or that term would have a totally different meaning.

When I was younger, my grandpa (who lived in OKLAHOMA) would come up and visit us and take me fishing. I loved the fishing part, but I couldn't deal with baiting the hook or taking the fish off it. I did love to grab the fish we caught as they were swimming around in my mom's cousin's huge sink, though. Not sure why that was so different than trying to take them off the hook...

Gorgeous land your friend has, too!

I love your eldest's expression. It speaks volumes.

Aww this is the first time I've seen pics of your sons and they are just adorable - and good at catching fish too!
Your youngest one's comment at the end is priceless - lol!

Great pics, thanks for sharing.

Like father, like sons, I guess. I've been to Shamrock! Stayed in a little motel on 66 and dealt with a hellacious thunderstorm and loss of power. Good times.

Love the younger tormenting the older. There's something so right about that. Could that be because I'm the youngest???

I use to go fishing with my dad, and I don't think I was very good at it. I can't remember catching anything, but it's something I remember so fondly doing with him. Your boys are going to have such good feelings about this past time with you when they grow up.

I spewed water out my nose at the "sniff my finger" item. Geeze man. You should warn a guy.

Too funny, Travis. My boy, age 8, is getting into fishing as well. It helps that his uncle is a pro bass fisherman, and though he's never home, his son, now 17, can take the boy out and I don't have to bait his hook for him. What a relief. I don't like fishy fingers.

Debra has the right of it.

I loved fishing for brook trout, alder pole and worm type fishing, very unsophisticated.Time disappears when one fishes.
Must look for the picture of my son with his first big catch.

Ah, now there's a recipe for a super day: nice weather, kids and cooperative fish. Can't beat that. Hope both your lads catch the bug. Sounds like one is well and truly hooked.

The 20" bow is a beauty. Any trout in the mid-teens and up is always a treasure in small waters. Nice job.

Good for the boys! When I was a kid, the only place nearby to fish was Frontier Village -- they had one of those places where you go in by an artificial pond with a waterfall, put a piece of corn on your hook and toss it in the water, and a minute later you had a trout. Your parents paid based on the fish's size, took it home, and stuck it in the freezer, then threw it out a year later. What your kids are doing looks like a lot more fun. :D

Tears will get a girl far if she knows when and how to use them.

Oh, for the record, my honey and I clean fish together. Don't tell him, but I do a better job ;)

OMG CUTE KIDS! Where did they come from??

Out of the mouth of babes.

How awesome. Thanks for sharing! :) Back in Canada my friend had a stocked pond & we'd fry 'em up right on the bank. Good times.

Sorry for my recent absence, btw. Nothing but problems with my brand new, WinBLOWS 7 computer. :(

Your boys are DARLING! Loved the photos. I told my husband not too long ago that it was time to take ours fishing. I have good memories of fishing, even though I don't touch the bait or the fish. :)