I've Been Telling Y'all 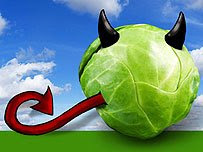 Most of y'all know my personal motto is ... Salad is the Devil.

You know I eat next to no vegetables, or anything green for that matter. Just the other day a teenage boy who is dating a friends daughter told, "I'm just like you. I don't eat veggies, except maybe for a little lettuce on my burger."

As a wisend adult of 37 I felt duty bound to warn him of the dangers. "That's exactly how it starts. A little bit of lettuce on your burger today ... a salad tomorrow, before you know it you're knee deep in boiled cabbage and asparagus. Come one man, Don't you know lettuce is the gateway vegetable?"

Here is a news story that just goes to show you how the mere word salad leads to no good.

Federal prosecutors said David Barouch's ex-wife returned home from church last Sunday and opened a FedEx package. Inside, she discovered two salad bowls taped together, containing a six-volt battery and a large bag of what appeared to be gunpowder.

"Taking the bowls apart was supposed to have formed a circuit that would have set off the gunpowder," Federal prosecuter Bret Helmer said. "The detectives determined that these bowls were sold only at Bed, Bath and Beyond."

Detectives found the only nearby location that had sold two of the bowls in the same day during the past month and a review of April 14 surveillance camera footage identified Barouch, of Fort Worth, as the man who bought them.

Barouch was arrested and charged with possession of an unregistered destructive device.

What do you bet she trid to feed him salad the whole time they were married. Sure, he is obviously a disturbed fellow, but I can just hear him muttering as he rigged up his ill-fated contraption ... "Romain, iceburg, that fancy purple crap. She wants to eat salad I'll give her salad."

Yep, pure evil I tell you.
Posted by Travis Erwin at 8:03 AM

Email ThisBlogThis!Share to TwitterShare to FacebookShare to Pinterest
Labels: a strange world, Food, I'm a Doofus

I've heard of the Twinkie defense -- but the Salad defense? My Gawd, what is the Justice system coming to!

Lettuce is one of the least nutritious vegetables. I hated all vegetable when I married. Boiling them to death and loading them with butter is not the way to go. But-if you look for the right recipes, almost all of them are delicious. Just don't cook them too long and add stuff to them. I still don't like brussell sprouts except with a lot of fixings on them. try roasting them on a grill (briefly) with garlic. Their natural sugar will come out.

Vegetables are good for you, Travis. I have a salad every day.

Too funny! You know as a woman it's odd for me to say this, but I hate salad. I'm an anomaly I know. I DO however love other vegetables and I'm not sure how this happened since I didn't start eating them until well into my twenties. When others try to coax me into eating salad I always ask "Do I look like a rabbit?"

Sorry about the PW review. I read the message board over at ABNA and it sounds like there were quite a few crabby reviewers. If it makes you feel better Nathan Bransford said he puts no weight on them. So much for a prize, huh?

I loved this post. I has your demon cabbage/head of lettuce, a great news clip, and a totally new direction for the war on drugs: "lettuce, the gateway vegetable!"

Keep on writing; one day you will succeed. Your blog is a smash hit!

It'll be tofu next. Then, soy milk. And remember the first syllable in diet is die.

Your post is both sad in its foundation and amusing in your slant on it. Thanks, Roland

You saw this story and ran all the way to TravisVille with it!

Glad to be back, Missed Ya!

I'm crunching some lightly dressed, almost naked, Romaine hearts as I read this. Oh yeah, I was born to be BAD!

My WV was even "romas!" Almost like the lettuce, and just like the little tomatoes. Be haunted and afraid of the evil veggie destiny!

I'm totally not letting my husband or my son read this. They don't need to know!

So long as you drink plenty of water and do a bit of walking everyday.

This is so funny...maybe I'll hit some one with some wilted spinach! Husband hates salad too...we've even gotten in fights over it...me playing mother, "Eat something green." And him refusing.
Happy Mother's Day.
mary

And here I am eating less and less meat. I'd best start keeping an eye on my husband.

...and eating too many veggies makes you turn into a vegitarian, which is only a step away to a vegan, and heaven help us they are just like zombies! It's the tofu, man, I'm telling you!

Huh, I saw your link on Facebook and thought for sure you'd be talking about the e-coli on romaine that was in the news recently. I had my argument about how it comes from meat producers all ready ;-)
You threw me a curve ball!

Then there is the listeria hysteria.

Just so you know, I like vegetables on my butter.

Look, I can understand your need to be manly and all, but...

A little lettuce never really hurt anyone, and I think you're just being culturally biased. It's all that southern redneck in you, huh? :)

Put some dressing on that lettuce and eat up. You'll survive.

Ah, Travis. Intriguing story. Salad isn't food, it's what food eats! Thanks for visiting My Muskoka ! Still little sleep, baby is up with her momma and papa every 3 hours! Yawn! I was called to support duty. There is a reason 54-yr. olds do not have children!

And the only REAL meat is smoked meat!!!

Too funny. You know what you're talking about. Vegetables are a tough habit to beet but they're good for you.

The Beatles all ate veggies through their best creative years, and produced songs which chanted "Give Peas A Chance" and which spoke words of wisdom like "Lettuce Bean." It earned them all a pretty high celery.

Handling a vegetable habit can be a difficult balance though - you don't want to squash your creativity but neither do you want to end up spending all your time downloading corn off the internet.

As for my own veggie habit, I make no excuses.. I yam what I yam.

I must admit, I have been corrupted. I have fallen in love with a local, Mexican salad. So in love that I even took pictures of my last one before eating it, just because it's so beautiful. Is there no help for me???