Critique groups. I've been in my share over the last decade. Good groups, bad groups, and groups simply not right for me, but I am increasingly a writer that needs a good critique group.

Enthusiasm is hard to maintain over a decade. Especially when that decade is filled with more rejections that acceptances, but a good group give a writer a weekly goal. It also provides a chance to hang with like-minded souls. To compare and learn from each other's writing. To commiserate the disappointments. To revel in the good times.

Let me tell you a bit about my current group.

Vicki and I have been in various groups together. Off and on we've been critique partners for a good seven or eight years now. Vicki has long been one of my most ardent cheerleaders. Over the years she has come to realize punctuation and grammar are not my strong suits and yet she patiently adds and deletes my wayward commas each week. I admire Vicki not only for her writing talents and skill at sniffing out my themes even before I've realized them but also for teaching ESL kids at a very tough school. Teaching is hard anyway but when verbal communication is removed I can only imagine the challenges.

I have known publishing credits include Woman's World, Writer's Digest, Millennium Science Fiction and Fantasy magazine, Working Writer, Mystery Readers Journal, Beginnings, Crime and Suspense, trade magazines, and newspapers. Star-Blaze Entertainment has optioned five of her short stories for opening episodes of a proposed television series. She's a former book reviewer for the Amarillo Globe-News, a frequent conference speaker and online instructor for Writing & Marketing the Short Story. Debbie is the newest member or our current group but she and I go back a ways including other groups.

Lisa first endeared herself to me in a previous group I was in when she read an F-Bomb laced short story that really put a bee in that groups bonnet. Especially since they had chastised me for using the word the previous week. I blogged about that experience here. Sadly Lisa has not been writing much fiction lately as she's been busy being a mother and writing freelance articles for the Amarillo Globe News, but maybe now that summer is upon us she will be back in the groove.

Caron Guillo is such a talented writer and possess a voice talented enough to completely erase genre lines and make me eager to read a story beyond my normal reading interests. Her debut inspirational novel, CHILDREN OF LIGHT, is due out in November 2010. Beginning in a thirteenth century German village at the dawn of an ill-fated peasant crusade the tale ends a decade later on a sprawling estate in Egypt. With careful research, Caron tells a lively story of faith lost and forgiveness found, painting the medieval setting with vibrant strokes. Caron is repped by the hardworking Terry Burns of Hartline Literary. Caron has written articles and short stories for Christian Woman, Choice, Church & Family, Church Growth, and Action! magazines. God Answers Prayers Military Edition (2005, Harvest House Publishers) includes her true short story.

Val Conrad is the newest member to my crit circle. Her debut novel Blood Of Like Souls, just came out from Black Rose Books. It is available at their website, or via Amazon in both print and kindle editions. 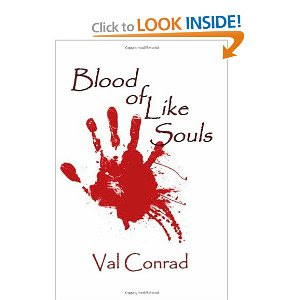 A bit about Val's book ...
Julie Madigan's career with the New Mexico State Police ended in a puddle of blood on the floor when she survived having her throat cut. But a year of recovery left her desperate to hide the scars and to escape the past. She moved to Michigan, away from friends and coworkers who knew her secrets. Now a medical examiner investigator, Julie plays by the rules, but the rules change when a killer sends her clues and evidence about two victims, taunting her with his unusual methods of murder, pulling her into his twisted game, and targeting those she cares about. His goal - to prove Julie will kill like he does. While trying to identify him, Julie discovers the monster has been closer to her than she ever imagined, leaving her in a race to save the next victims he's selected, forcing her to chose who lives and who dies.

Val will be in Michigan this weekend for any of you readers up that way. Stop in and pick up a copy of her novel and tell her I sent you.

As you can see I am the underachiever in this very talented group of writers.

Glad to meet them. Sounds like a talented group of writers.

Sounds like a great group! I thought Julie Madigan was a member too until I figured out why her description was in yellow text. D'oh!

Wow. Great critique group! I'm not in one right now, but someday, I hope to form another one. And you will someday soon be a published writer because of their help. We have faith in you, Travis!

Sounds to me like you're surrounded by the right kind of people, Travis. I haven't read your blog as long as some, but I will be the first to say I see possibilities and potential in your writing. You have a distinct voice that sets you apart from others. While not everyone appreciates this maybe, I am confident that the right agent will pick you up when the time is right. Keep at it dude. You'll get there.

No wonder your writing just keeps getting better and better, Travis. This sounds like a keeper group for sure.

what a great group you have going there! All of you brimming over with talent and enthusiasm.

You all sound very supportive and helpful with each other and that's the main thing - that you draw strength and confidence from the group.

What Travis doesn't tell you is that we're all in the group because of him! He gives thoughtful and insightful critique, keeps us laughing, and inspires us with his terrific talent. He just happens to be the baby of the group. By the time he's our age, he'll be famous. :)

Thanks for the wave in your critique, Travis! I made it to Michigan without being strip searched, and the signing starts tomorrow!

And for those who didn't know, I think I speak for the group he listed in saying we appreciate Travis' writing, style, F-bombs and all.

What a great group, Travis!

*shakes hands* Sounds like a smart and varied group.

My writing group dates back 30 years although I have only been part of it for about 8. I like the people; they aren't particularly helpful since they don't read in advance. There is some merit to reading aloud but not much. They tend to fixate on grammar way too much. I keep telling them no one had turned down a story for that. But to no avail. I wish I lived down there.

Hey now, are you giving my blog-friend a hard time, calling him an "under-achiever?" Dem's fightin' words.
More seriously, though, we creative types need to learn to beat ourselves up much LESS & pat ourselves on the backs when we deserve it much MORE. Stay gold, Pony Boy!

Yesterday, my critique group caught a mistake I've had in a piece for ages and must have read past 100 times. They can indeed be handy.

uhhhhhhhhhhhhhh We rarely get to the writing part of why we gathered in the ifrst place but it certainly is a humorous event when we get our little group together.

Keep up the good work! I invite you to see my post, I hope you will find interesting too.