A few weeks back, in one of these posts about my childhood here in Amarillo, Texas I mentioned that my neighborhood was on the far southeast corner of town. I wasn't joking and i recently captured some pictures to show y'all what I mean.


This is the view looking east from 32nd street where it dead ends into Eastern. 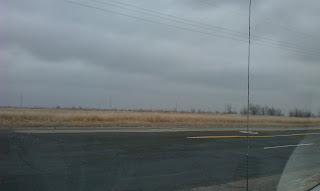 This is of course the sign at the intersection of 32nd and Easter. 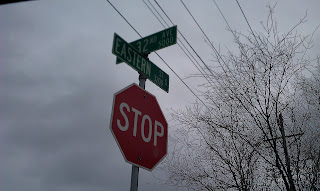 And should you have your mind in the gutter and look down just a few few away from taht stop sign you will see this ... some of my earliest surviving writing. 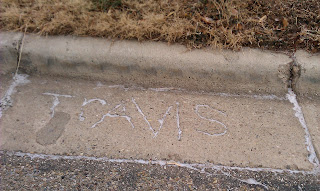 I scrawled my name in that patch of wet concrete  in the mid eighties. '85 or '86 if I had to guess. I got lucky in that we'd had a dusting of snow so the letters show up pretty good in this photo. My graffiti has not relevancy to this post other than it's location and to further prove I was a hooligan but I felt compelled to add it to the mix.

This post is actually about the only time in my life I've ever been shot at. With real lead and not paintballs or some other sort of harmless projectile.

The farmland that lay just beyond Eastern street belong to a grouchy, ill tempered man. He lived in a run down house that used to sit on this parcel of land but as you can see by this photo all that survives now is an old tin barn. 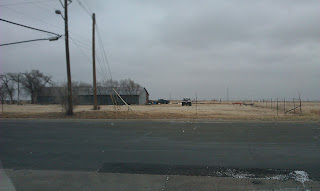 About half a mile south east of this shot, on the corner of this particular land there used to be a pond. it too is gone now, but back when this was a working farm actively growing crops the pond was what we call in this part of the world a tailwater pit.


Here are a couple of shots I borrowed from Google images to show you what I mean since the actual one of my childhood are no longer there. 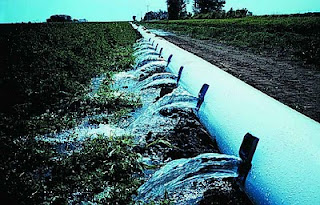 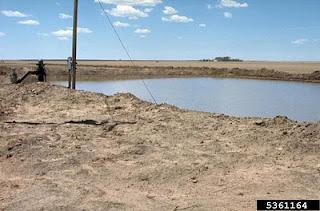 The water that did not soak into the ground would run down hill and collect in the tailwater pit or pond where it could be pumped back up to the uphill side of the field and used again.

Some farmers stocked fish in these ponds.

Some Farmers do not like boys to grab a fishing pole and ride their bikes out to these ponds.

Some farmers do not like it when said boys catch the fish they stocked in their ponds.

Some farmers load up shotguns and pepper the the area to get their point across.

No I was never in any real danger given the distance the farmer would pop of shots at us, but when you are a kid that kind of logic does not enter your mind when fear kicks in.

Of course neither does the realization you really are trespassing. And even though we got "shot at" on several different occasion we kept venturing back. One it was the closest place to fish and two, the danger level added to the sense of of adventure.

So yeah, I can honestly say I've risked taking a bullet, or at least buckshot just to sink a worm.

You ever been shot at? Risked life an limb in pursuit of a hobby? Defaced communal property and had it last a quarter of a century?

For more My Town Monday posts check out the official MTM blog.
Posted by Travis Erwin at 10:45 PM

Cool post Travis nice seeing where you grew up :) I can say never been shot at, only chased with a gun when I was in HS

I'd never heard the term "tailwater pit." I'll have to ask my Okie husband if he knows it. and, uh, no, I've never been shot at. And to think you boys kept going back! You really wanted to fish!! ;)

Yes. Not in pursuit of a hobby and I won't be going back to that part of town to check.

Does the footprint in the cement belong to you too or only your very neatly printed name? Your first publication!

Truthfully, it reminded me a bit of Merry and Pippin when Frodo and Sam meet up with them in the farmer's field.

Yes, I've risked my life horseback riding, though that may be due more to my skill or lack thereof than the circumstances.

My fil was a farmer and all the neighbors. They liked boys fishing. Too bad that man was such a grouch.

Phats - That's what you get for fooling around with married women.

Barrie - I bet he has heard of a tailwater pit.

Walking Man - I don't blame you.

Debra - Actually that seems to be a splash of concrete. It didn't use to be there.

Junosmom - Maybe he was just stingy.

As to your questions. I've never been shot at. I did risk life and limb more than once--always seemed like a good idea at the time. And my memorial carving of my name on Valentine Ave in the Bronx lasted from the early sixties until the nineties.

I used to rock climb, so I guess I have risked my life, although I was always pretty careful to make sure that risk was small. If you're doing it right, top-roping is not dangerous.

I have risked serious injury far more often. Jumping off the roof onto our trampoline seemed harmless, but then one of my brother's friends broke his leg jumping just off the fence onto the trampoline. Oops.

Oh, and my brother and I once flipped an ATV pretty badly, but we were on soft dirt. We dusted ourselves down and never told anyone.

I remember those days, up in the Panhandle, as a child. Glad you survived to tell about it! I've never been shot at, have risked life and limb a few times doing the outdoor nature thing, and no, I managed to escape my youth unscathed and without leaving behind any 'sign'. ~karen

Ah, now the truth is out. I've read about irrigation ponds, but not that the farmers would stock fish in them. That's such a temptation for young boys.

I recall trespassing neighbourhood yards to flich peas and strawberries from their gardens, or sometimes errant branches that grew between fence slats would bear their fruit at a location offsite.