Tuesdays, here on the blog, are dedicated to holding myself accountable. Each week I going to toss out the facts and figures of my goals.
On this Tuesday, January 25th I weigh in at 280 pounds.

Again only a one pound drop. I think I'd have dipped below the 280 mark if not for those blasted Girl Scouts. jennifer brouhg home a box of those tasty little chocolate, coconut, and caramel circles. Those Caramel Delights taunted me until I ate every last one. To give you an idea of my current look, here is a shot taken of me and my friend Caron Guillo at her booksigning party on Saturday. 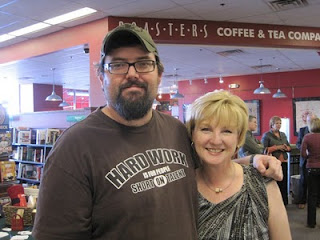 Caron's debut novel is out and titled An Uncommon Crusade. Buy a copy today.


I finished one book this week to bring my total to 4 on the year. Several people had told me how much the Sweet Potatoe Queen books reminded them of my Feedstore Chronicles so I finally read one, The Sweet Potato Queens' Book of Love.

To be honost I was disappointed. Sure there were funny parts but I truly think this is one best read by women. I din't usually say that as I have read and enjoyed a good many romance and women's fiction novels, but this book struck me as sort of a southern Sex and and the City. Sex in the sticks if you will. I'm taking HBO series as I've never read Candace Bushnell. My wife was a fan, but Sex and the City's humor missed for me as did the Sweet Potato Queens'. Here is a sample to illistrate my inability to relate ...

And panties -- Lord, deliver us from pretty panties. You just put them on and they immediately wedge up your butt, you don't even have to move. Thongs were a perfectly natural progression -- why not save all that extra material, they all end up in the same place anyway.

I sent a dozen queries on a variety of projects this week, but once again I ...


Failed to so much as open the file on my bull semen story so that word count stays at 16,212.  this week. I did finish continued editing and tweaking Waiting On The River to get entered in the Amazon Breakthrough Novel contest.I also entered the opening of the bull semen story in Nathan Bransford's ...
The 4th Sort-of-Annual Stupendously Ultimate First Paragraph Challenge.

I was fortunate enough to beat out over 2500 other talented writers to win the 3rd Sort of Annual challenge with the opening of the Feedstore Chronicles and I've entered again to try and defend my crown ...

Grace McEwen was eight the first time she stood outside a closed door and listened to her mother squeal and sigh with pleasure. Thirty-one years later, she found the sounds just as awkward. Maybe more so, now that she fully understood the source of her mom’s vocal gratification.


Two Line Tuesday is a blog feature started by the fabulous Women of Mystery. Click on over to their site for link to other writers sharing their work
Posted by Travis Erwin at 10:48 AM

Email ThisBlogThis!Share to TwitterShare to FacebookShare to Pinterest
Labels: Favorite Things, Food, goals, Me, my reads, My Writing, writing life

Great job on the editing. I haven't done much writing in the last few days, either, but that's because I was stuck. I *think* I've got it figured out now.

I hate thongs and refuse to ever wear one. ;-)

I like your goals...all of them! I just sold an essay titled...JUST EAT. It's so hard to lose weight...trust me I know. Just eating works for me the best...

Interesting book review - I don't really care for the sex and the city humor, so it's probably not for me either. I think either you love it or hate it.

Shhhh...peek over at my blog--I forwarded something to you there. =D

If those girls in the Sweet Potato book bought 100% cotton knickers with a touch of lycra, they won't be having that problem. And best knickers are ones bought in M&S.

Good luck defending your crown!!!!! And all the best with your writing! And you look just lovely!! Take care
x


Thank you for your dear friendship here in the blog-world.
Please stop by today to share a special moment with me if you have the time. Warmly, c-
Comfort Spiral

GLad to be out of the range of GS cookies this year. They are killers.

Hope you get some positive feedback on your queries. and yes those girl scout cookies can be a diet deal breaker.

Keep on keeping on!
Good for you for checking in.

I'm keeping my goals quiet.
Just one foot in front of the other.