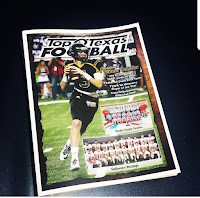 This piece first appeared in the 2015 Edition of Top O' Texas Football Magazine.

They stand tall, stoic. Day after day they absorb the unrelenting punishment bestowed upon them. Sun beats down on their skin. The wind pushes at them, at least in this part of the world. Rain, sleet, hail, ice-storms and blowing grit attack, but still they stand upright and tall in every Texas town. I am of course, talking about the famed Friday Night Lights that give this state a huge part of its identity.


They are inanimate objects forgotten for most of the year. Yet, they loom large in communities from Texline, down to Terlingua, and on over Tyler way. Whether they tower above small aluminum bleachers, or huge stadiums built and carved into the landscape, they shine down upon our pride, our joy, or hope and our fear. No one wants to lose to their cross-town town rival or that neighboring town.

Friday Night Lights. We flock to them. We feel the power and allure of them. If you’re holding this thick magazine in your hands you can bet they mean something to you. But how many of us ever pause to think what it takes to turn those lights on?

No, I’m not talking about the dude that literally throws the switch prior to game time. I am talking about what gives these lights the magic that draws crowds, inspires books, and creates movies. True magic, not the slight of hand smoke and mirrors of a stage act, but genuine wonder and awe. The stuff of dreams.

It begins on the couch. Father and son watching a Cowboys game. Or on those family trips to Lubbock and College Station for one of those crisp, fall days. Maybe it is a game of catch in the backyard with a brother, a cousin, or that kid down the street. The where is as varied as the colors and mascots of the many teams that line up to play each Friday night, but there is one common thread … it begins with a love of the game. The sound of a crowd, the feel of the leather, the rush of competition. But that is not enough to turn on the lights.

It is hours of overtime, or the sacrifice of one less meal out on the town as young families and single parents scrimp and save so they can sign their boys up for youth football. Maybe the kid themselves sells candy bars to family, friends, and neighbors. Or maybe it is not youth football, but soccer, or baseball, or wrestling, or track, which first captures a young boy’s heart and feeds the flame. No matter what conjures those competitive juices, and builds coordination, eventually a kid must decide they want to shine on the brightest stage out there. They must say to themselves … I want to stand beneath those Friday Night Lights.

But still it is not enough to turn on those lights. The sacrifices of parents and caregivers from money, to time volunteering as coaches, to shuttling their offspring to and from practice. The hard work of the kids themselves. That is all part of the magic, but it is not the whole story.

It takes communities and taxpayers of hardworking men and women to fund the school. It takes the drive and passion of the teachers that will take these young men and push and shape and mold them into football players worthy of stepping beneath those lights. It takes car washes, and camaraderie and booster clubs and cheerleaders both before and during the game to rouse spirit in fans and towns. It takes the love of family, and friends and the pride of towns and alumni. It takes refs driving two maybe three hours to do a thankless job. It takes coaches, both the head man and his assistants, missing valuable time with their own families to best prepare their adopted sons for Friday night. It takes parents making long drives across the sparse Texas landscape. Drives that begin in the years before the bright lights come on. Drives when they are 7th, 8th graders. Freshman and JV.

Yes, it takes a long time before the lights shine bright.
It takes sweat, tears, money, and motivation. It takes love and pride and hope to turn those lights on.

So this fall when you look up and you see those swirling moths and flying insects do not think of them as bugs flocking to a light -- think of them as God's smallest creatures gathering in the glow of a true spectacle that only those who have fought so hard and so long to illuminate.

Think of how special those Friday Night Lights truly are.

satta king
play bazaar and in others, no guidelines exist. Ensure that you just encounter with somebody respectable so as to keep yourself protected and open to during your treatment procedure.