The world is full of things I simply don't get. I've blogged about a few before such as those fluffy toilet seat covers, eyebrow pencils, and coffee enemas. I like to categorize these items under the Riddle Me This grouping.

Today I'm taking a random approach and adding two items to the list. Two totally unrelated items I might add.


1. Wake Up -- A common enough phrase. Heard at home, work and even the radio.

"Billy wake up, it's time to school."
"Hey Idiot, wake up and smell the roses."
"Wake me up before you go-go."

But riddle me this. Why must we always wake up? Just once I want to wake down. Or wake sideways. After all we don't say time to sleep down. I suppose you can shut down you mind, though in my case my mind seems to go into hyper thought when I get I bed for the night.

A person can lay down. I get that. And they can get up. But can they really wake up? I think not.

2. SpongeBob SquarePants I do not like Sponge Bob. My boys however love the show. Who do I not like it? The reasons are many. The porous protagonists nerve-wracking voice and laugh. The fact nary an episode goes by that one or more characters is shown in their underwear. (Why didn't they call it Sponge Bob No Pants?) Then there is Mr. Krab. The cantankerous crab that owns the Krusty Krab and sells Krabby patty's. 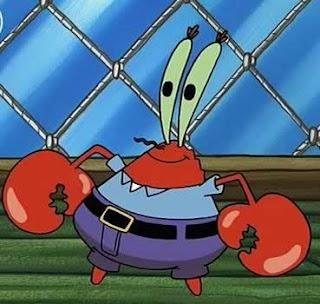 His name is Krab. He has larger red pincher's so I think everyone will agree that SpongeBob's boss is a crustacean. A crab.

Mr. Krab has one child. A daughter. Named Pearl. Riddle me this if Mr Krab is a crab, why is his daughter a sperm whale?

Far as I know there has never been mention of Pearl's mother. Maybe Mr. Krab and her had a one night stand and the baby was dumped on the doorstep of his restaurant nine months later. Maybe they are divorced and Mr. Krab is so miserly because he pays a hefty child support. Here's me theory. Pearl's mom is dead. She was also a two-timing whore.

Why you ask. Follow me as I deliver the evidence. It doesn't take Jerry Springer or a DNA test to unearth the fact Mr. Krab's is not Pearls real father. That means Mrs. Krab's sold him a bill of goods. It's rather obvious she stepped out one night and got drunk. Maybe Mr Krab's was away at a Small business owners convention and she simply got lonely. Who knows. But it is obvious she and a whale got busy.

So from there it's easy to arrive at the fact she's dead. If, and this is a mighty big if, Mrs. Krabs survived the actual deed. I'm saying that because .. well let's face it, a sperm whale and a Krab don't exactly fit together like fish and chips. There had to be some residual damage from the actual deed, but back to that if. If Mrs. Krab's survived the deed I gotta think a crab giving birth to a whale is gonna do more damage than a fat guy at Red Lobster with a pair of these.

Email ThisBlogThis!Share to TwitterShare to FacebookShare to Pinterest
Labels: I'm a Doofus, Riddle Me This, The sorry state of televison, Words

Too much deep-thinking for a rainy Monday.

So we could surmise that Pearl's mom had a whale of a good time...

A lot of time on your hands, it seems.
but still amusing

Needless to say, I foist Phineas and Ferb on my kids instead.

Maybe Pearl's Mom was a whale too, didja think of that? Mr. Krab may have been in a mixed marriage. She could still have been a two-timing whore though. Pearl's father was probably Moby-Can't-Keep-His-Dick-in-His-Pants.

Am I allowed to comment if I didn't know coming into this post that Mr. Krab has a child?

I think we say wake up because it sounds like what the rooster is saying. To me, anyway.

ROFL! I am now glad that I have never watched Mr. Spongebob. :-)

I was also going to add that Mrs. Krabs could have been a whale, but someone beat me to it.

As for Spongebob...I don't care for it, either, but my kids and Toby love it. I have to say, at least it is better than some of the alternatives (i.e. The Simpsons, Family Guy, CatDog, The Grimm Adventures of whoever...)

I've always wondered about the wake up thing myself. I like the wake sideways... who knows, maybe it will catch on.

As for Spongebob.. I never got him either. Me thinks your brain DOES go into overtime when you should be sleeping down.

There IS one funny episode that I LOVE though. Hold on.. I will scour my archives for the post...

LOL! I like the idea of waking sideways, too. And I guess you wake down when you roll out of bed onto the floor, right?

I don't like Sponge Bob Squarepants, either. Fortunately, my kids are grown. When they were little it was Barney the Dinosaur that was enough to make you pull your hair out and scream.

Thanks God. I am not the only one who thinks about this.

Very sexist to assume that Pearl's missing Mom is the two-timing whore here. Perhaps Pearl is her crabby father's bastard child. Maybe HE had a one night stand with a female whale who brought him the baby and disappeared. And so his wife left him. Thus, no woman in their lives...

The problem with waking sideways is the tendency to fall out of bed.

Wake over dude and realize that Mrs. Krab was blown apart at birth when she delivered the baby and that the pregnancy was conceived in a test tube...which seemed a good idea at the time.

I think you're taking Spongebob too seriously.

I have always wondered about Mr Krabs and Pearl though. Maybe she's adopted.

I'm a huge cartoon fan and must admit for a 27 year old woman with no kids, I do watch far too much Spongebob. I do prefer the darker cartoons though - Grim Adventures of Billy and Mandy, Dexter's Lab - that sorta thing.

LOL. Dude, this is way to deep for talking about a cartoon. You need to go back to the Bugs Bunny memories and remember when why we didn't ask why. Nice analysis of the crab/whale relationship though.

Oh, Travis, you have tapped my soul. I hate Sponge Bob, loved Gremlins, wake up Sideways every day, thanks to Holly Lisle. Little Kid in this house loves Theodore Tugboat. Anyway, if SpongeBog were much of an actor, he'd have been at least an extra in Finding Nemo.

Wow. I have never watched Sponge Bob but it sounds like I am missing some serious stuff. Hopefully Bob will be off the TV by the time my little man starts watching. Great point about wake up. The one that has me baffled lately is the roll the window down motion. Will our kids still be doing this? Most cars have automatic windows now so hardly anyone still rolls down their windows the old way but we still do the motion to people.

It sounds like you are forced to watch too much Sponge Bob. I know who he is and that there is some pineapple under the sea involved, but that's about it. I think it's nice that you watch it with your kids even if you don't like it. My only "kids" are a dog and a cat and they don't get to pick the shows :), although the dog likes TV (she doesn't care what's on, she just likes the moving lights...she will whine at the TV or stare expectantly at the remote when we get home).

What the hell had you been drinking when you wrote that??? I think you have too much time on your hands.

I love sponge bob, he lives in a pineapple under the sea, the whole concept is absurd!!!

LOL!
You are a stand up comedian now-
Aloha

Holy Crap this was funny!!! You made me laugh! I love your "not so serious" posts. You have a great sense of humor.

Why do these programs get aired? I guess you missed the last educators set of meetings: dumming down the population to prevent independent thinkers.